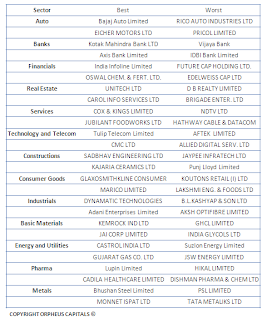 10 fundamental reasons why you cant go wrong with Coal India

The first week of August, 2011 saw the world financial markets tumbling like a house of cards, the trigger being the US debt downgrade by credit ratings agency Standard & Poor's. Financial markets continued to demonstrate large volatility with equities, risky assets and commodities (except for gold) tumbling and bonds rallying.
For many markets, August’s savage sell-off has been the worst since the October following Lehman Brothers’ implosion and investors diversified into havens such as high credit government bonds and gold.The fact that the US and European economies are down in the dumps is obvious enough. But almost three years after the collapse of Lehman Brothers and a massive dosage of stimulus packages, debate still prevails as to whether the global economy is on its path to recovery or is likely to sink into another recession; having said that, more than one indicators point to the latter scenario.
Few recession indicators:
Take shipping to begin with, which is a critical indicator of global financial health because so many of the world's goods travel by sea. The latest data about dry bulk commodities-shipping costs, as tracked by the Baltic Dry Index, reveals that rates have fallen by a third so far this year. Further, the industry has not been able to impose normal surcharge which is typically a feature of peak demand periods.Other indicators are the revision of various estimates as far as GDP growth and oil demand are concerned. Most global organisations have cut down GDP forecasts taking into account the failure of the developed nations to recover. But these downgrades are not just applicable to developed nations but to emerging countries as well. The latter especially are expected to witness a slowdown in growth as inflation and interest rates rise.
On the oil front, OPEC expects demand to drop. China, which is one of the biggest guzzlers of oil, is likely to consume less oil as its economy slows and demand slackens. Government spending has also come under severe strain in the developed world due to massive debt thereby restricting any headroom to spend on activities that will contribute to GDP growth.
It doesn't end here. Unemployment has become a cause for worry in the developed world as it has remained persistently high in the region for quite some time now. Indeed even in China, although the CIA Fact Book has recorded the unemployment there at 4%, it comes with a caveat; this figure takes into account the urban areas only.
On considering migrants, the rate may very well jump to 9%. Poverty is another indicator. The number of people who live below the poverty line and have poor access to food has risen sharply this year hurt further by drought, flood and higher food prices.
Not to mention the telling effect that all these factors have had on the global financial markets, which have once again seen a sell-off in recent times. Indeed, even if the staunchest optimists are not ready to believe that the global economy is heading into a new recession, they will have to concede that recovery is certainly not expected to happen for some time to come.
The 18-month long Euro sovereign debt crisis has been characterized by a series of market shocks.However, in recent months, the downgrade of the US' sovereign ratings has taken precedence for economists and markets to follow. But the stage seems all set for the Euro crisis to take centre stage yet again. The silence of political leadership in the Euro nations during the summer months is expected to break shortly.What it means is that the debt restructuring debate for economies like Greece and Portugal and Ireland will heat up. The money poured into the Euro debt crisis by the likes of Germany and France has already caused sufficient financial tress to the stronger economies in the EU. Whether the policymakers will allow that to continue remains to be seen.
September crucial
Important event in month of September would be The Federal Open Market Committee (FOMC) meeting on 20-21 Sep, where US policymakers will “allow a fuller discussion” of the economy and the Fed’s possible response.Bernanke said in the speech at a Fed conference at Jackson Hole in last week of August that the central bank still has stimulus tools, while not providing details or committing to deploying them. Despite evidence that its previous actions have done little to revive the U.S. economy, the U.S. Federal Reserve is likely to take more action before the end of the year barring a swift turnaround in such indicators as unemployment, consumer spending, and housing.FOMC minutes from its Aug. 9 meeting, released on Tuesday, indicated that several members already favor more Fed intervention. On Aug. 9, the Federal Open Market Committee said it expected to keep interest rates exceptionally low until the middle of 2013.The FOMC discussed virtually every policy tool available to it, including a third round of bond-buying known as quantitative easing (QE3), an "Operation Twist" that involves selling shorter-term notes and using the proceeds to buy longer-term notes, and setting numerical targets for unemployment and inflation.The debate will be continued over two days next month. If economic indicators continue to deteriorate, chances are policy makers will choose to implement one of those policies.
If some monetary policy is announced in September meeting, then we could certainly see Gold touch $2000 and Silver touching $45.
-Umesh Shanmugam

Email ThisBlogThis!Share to TwitterShare to FacebookShare to Pinterest
Welcome ye fellow Fundamentalists!
The Stock Markets have always fascinated me. The wild swings that make and break fortunes. The swashbuckling punters, ever ready to wager the last bit in the hope of hitting jackpot. The mauling bears. The bulls on rampage. The sheer energy of addiction … it never ceases to awe, to take the breath away.
But why do scrip prices move the way they do? Some, like soothsayers can look into the emerging pattern of price movement and can predict their future directions. Some rely on gossip, whispered “tips” to play for fame and fortune. Some even device ways and means to manipulate making money as a byproduct of the sleight of hand. While others just follow what the big boys do, putting their monies in scrips allegedly patronized by the big and the mighty.
However, none of these strategies work for me and I remain what I always were – a hard core fundamentalist. I believe that prices move up and down based on solid fundamental reasons. If a company is doing well its success will be reflected in its scrip price and vice versa. My effort here will be to track companies with potential on the upside – companies that are expected to do well. Future success stories that  we would like to study in the present.
This will by no means another blog to spread “informed” gossip or sure fire tips. Remember, it is not God’s duty to make you rich. Neither is it mine. Whether you buy or sell based on what you read here is entirely your call. I am not here to give advice. I am here from the purely academic desire to study a phenomenon. And yes I do not play the markets. I am far too un ambitious a romantically poor to be doing so!
Posted by core sector at 03:13 No comments:

i am a pure fundamentalist. i do not understand the charts. the graphs leave me gasping. i put my money where the fundamental, underlying reasons are ...

come join me in this voyage ... im sure well make some money in the process :P